A few select experiences of mine

Case study: From I to WE

I was assigned to help out with aligning the team around a common roadmap and build a strong culture of collaboration. I quickly saw that there was disarray within the platform teams apart from the obvious and natural disarray between teams. The focus on solo-work and even trench wars in some cases required a shift of mindset. This made the approach two-fold. Firstly, I coached the platform teams into becoming more collaborative within and being good at expressing that collaboration outwards, i.e. making their work more transparent and focused. I had help in the shape of a central collaborative team who acted as advocates. Secondly, I introduced a temporary but specific way of working structure that would force collaboration between platform teams and support the overarching SVT Play roadmap. This way of working was a necessary step to take on a maturity staircase, because the teams saw themselves as and needed to be two steps up from were they actually were.

I laid the groundwork for a strong collaboration culture within the whole SVT Play group (perhaps soon calling themselves one team), by transforming them from individual teams with a strong sense of ”I” to a shared sense of ”WE”. The strong way of working structure introduced to catalyse the transformation was later changed to a more sustainable version by a colleague of mine. Today, the teams have a clear and effortless way to do SVT Play-wide work. There is harmonisation between teams, platforms and also user and software interfaces through alignment around a roadmap.

A mid-transformation (6 months in) evaluation of the SVT Play group,
showing a little bit more stress, mainly due to the tough way-of-working structure, but greater focus, happiness,
sense of meaning and engagement

To be able to improve, it has to be obvious what the starting point is, what the landscape of change looks like and what the end goal could be. It can start by raising awareness of the current state.

SVT Mixat wanted help improving their way of working. While we were talking, they realised the importance of mapping out their maturity in different areas and invited me to teach and workshop with them around the topic of improvement.

The shared language around improvement probable gave the most impact in the team, giving birth to fruitful discussions in adjacent areas as well as acting as a catalyst for change within. The structure for continuous improvement based on maturity levels helped build a great foundation for even bigger improvement steps. The team found new practices that helped them raise the quality of their deliveries. Today, the previous members of this team are advocating for change in their new teams.

Case study: Guiding through the playbook 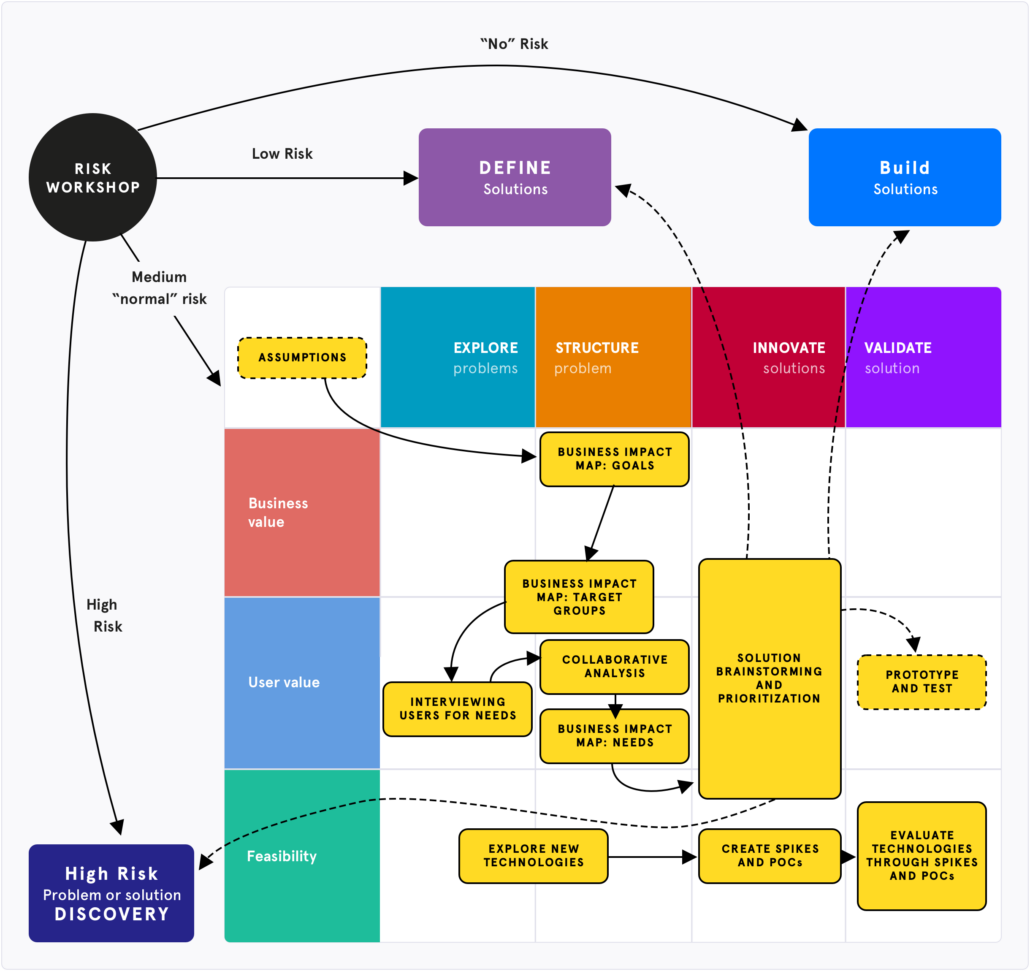 Playbook for the team at King

A team whose mission was to build and maintain a game operations platform for operators and developers in a large gaming company had realised a year back that they needed some developer tools for building applications for that platform. This realisation came through feedback that it was hard to start creating applications, regardless of the knowledge and experience of the developer. The idea for tooling and support for the platform developers to fulfil their needs was born.

I was assigned to help out with the second stage of the project, when the team had understood there was a great need for deeper discovery to make sure they built the right thing. Since I was meant to help out over a longer period of time, the playbook I made was just shared briefly as a concept to the team, and then I gave them one part of the map at a time so not to overwhelm them.

The employees learned the mindset very well along the way and could change the playbook when needed on their own.

The CTO at GfK NORM had understood that his team was more in chaos than in order, and especially not working in an Agile fashion. He needed the team to become way more efficient to tackle the delivery problems they currently had.

I was assigned to structure the process for the team, focus the delivery efforts and make sure that the team stayed motivated.

The team could work autonomously analysing their own process problems and easily identify which problems that they could solve and which they couldn’t. This information helped the CTO to restructure his work force in a more efficient way.

A continuous improvement session with the mob programming team Sportmobben

SVT Nyheter faced the challenge of discontinuing the Sports news app (which was done by a third-party) and placing the sports content in-house and somewhere fitting in their digital environment. The development manager recruited a cross-functional team, looking specifically for collaborative people wanting to work with problem and solution discovery as well as delivery.

I was assigned to coach the team in mob programming (collaboration) and Lean UX (discovery and delivery) in addition to getting the team running smoothly.  I spent a total of 90 hours over 2 months with the team, establishing a culture of communication and innovation, a collaborative and empirical way of working, including a continuous improvement process. In the end, that helped deliver an innovative and user-centered integrated Sports solution in the News app and organisation.

The development manager stated that the team managed one of the smoothest product release in the lifetime of SVT,  after the goal “News and Sport — One Service, One Experience” that the team set up was reached just in time for the World Cup 2018. He also noted that the team could solve any problem thrown at them, by working as one entity, for instance to solve a sudden problem with a presentation software during a demo. Some of the team’s practices also went viral in the organisation, turning the team members into mentors for others.

Several team members were happy with the mob programming method specifically and a blog post was written about it: 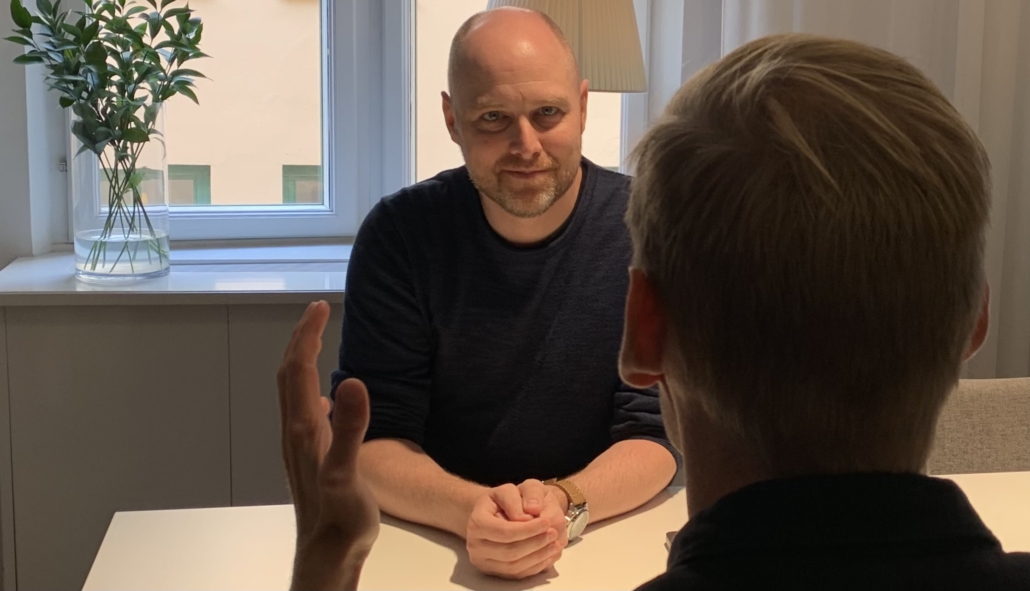 1-on-1 interviewing to understand the context

The organisation had identified some potential areas of improvement. If these areas were a few persons’ opinions or the whole organisations’ pain points needed to be discovered.

I was assigned to do an organisational transformation based on these potential areas of improvements. To start, a full assessment of the organisation was needed.

The leadership and the employees understood the common problems of the whole organisation and could begin to understand their role in the upcoming transformation.

The organisations needed expert competence in Product Discovery methods, such as User Research and Lean UX. At Qwaya, they did a lot of quantitative analysis but had understood there was a qualitative component missing. At Snow Software, they had very explicit focus on Business and Technology aspects of their products, but lacking competence in how to tackle the Experience.

I was hired as an expert coach, training people in the organisation in Product Discovery through different focused activities over a longer period of time, at both Qwaya and Snow Software.

The competencies development at Snow led to a change of view in the company as a whole, starting a transformation journey towards a more customer-centered organisation. The training at Snow gave them enough skills to perform qualitative research complementing it with their previous quantitative and through that finding new business opportunities. At Qwaya, a greater understanding of their users/customers helped focusing the product development and gave a lower churn of users.