I was assigned as an interaction design consultant to the Swedish Pensions Agency, working in an agile team with a new web service concerning housing supplements for pensioners. The pensioners had a lot of trouble with the forms they had to fill out to apply for subsidies on their rent. Usually, an administrator at the Pensions Agency had to help with filling out the form. 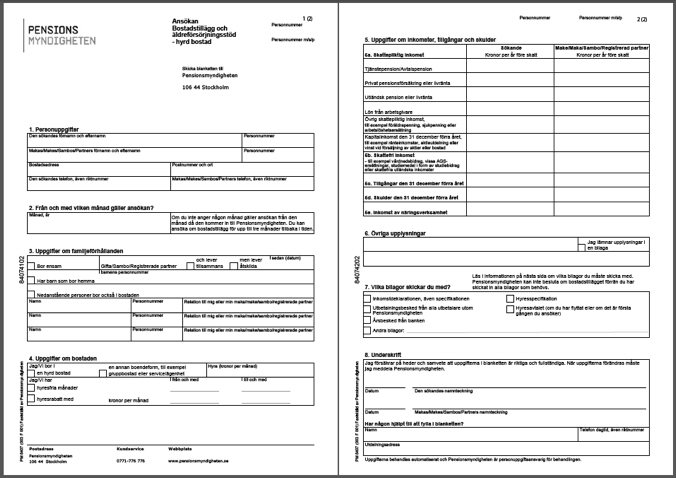 By creating a web service, the Pensions Agency hoped to relieve some of their administrators from this job. But, the regulations and policies for applying are very complicated and a lot of support was still needed for the pensioners. Luckily, we had a couple of experts on the team as well as an excellent copywriter. Together, we made a very complex task into something that the pensioners actually thought was fun. We had 6 weeks to do it.

The regulations called for a complex structure, but we managed to show the workflow for the pensioners in a few steps, here shown in a navigation bar from the website.

This might still look long and tedius, but the pensioners said, if you have tried to fill out the old form, you’d know that this workflow is very simplified.

Since a lot has to be filled in correctly, we had to give the pensioners ample time to prepare. When you are in the workflow, there is a technical timeout for the website, so you have to know what to fill out. We made this process simpler by asking the pensioners to bring out certain documents before they made their way into the actual flow. 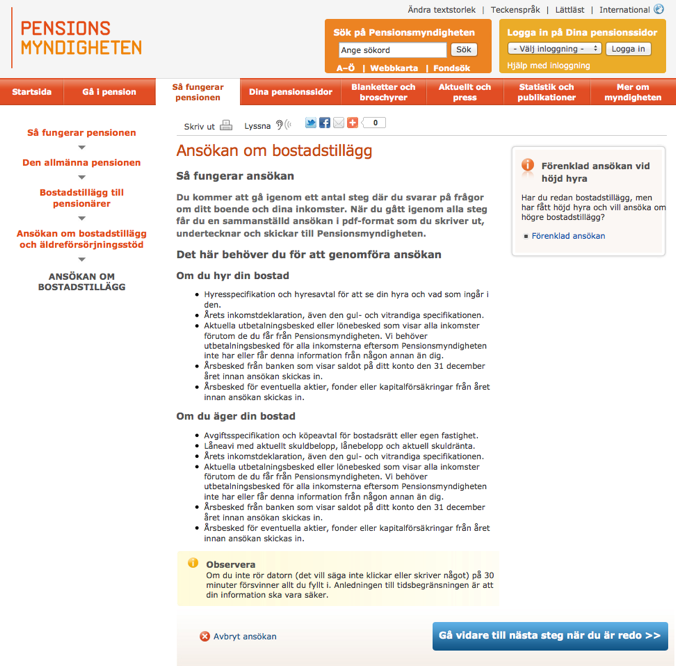 In the workflow, we hid and showed interaction elements depending on what the pensioners had chosen on the page (or on the step before). By this, we managed to only show relevant information on the page at all times. We also made sure that the explanations and labels throughout the interface used a language that the pensioners would be familiar with.

On every step of the workflow, we added explanations written in an as easy language as possible while at the same time not over-simplifying the regulations and policies. These explanations were easy to find for the pensioners, and were used throughout the workflow. Remember, this is the generations who are used to reading manuals.

In the future, it is meant for this web service to generate a work task in the Pensions Agency’s internal systems directly. This would require a secure identification system for this workflow, to ensure that all work tasks generated are correct. In the meantime, we created a PDF-application out of the information entered by the pensioner.

At first, the plan was to fill out the form shown above with the correct information, but I suggested that we instead would create a letter that would look as if pensioner had written it. This idea worked well with the pensioners, and they would then print the PDF to go through it in detail at the kitchen table before sending it to the Pensions Agency. They said that it really felt as if they had written the letter themselves, that they were responsible for the information in it (apart from the logo and the document number on the side). This helped them filling in everything properly and correct.

The last page of the letter contained a list of documents that the pensioners had to remember to take a copy of and attach to the letter. This had been one of the more complicated problems to solve with the old form. The list was written in an easy-to-read format and seemed to work well.

I left the project after the first release, 8 weeks later (the last two weeks I spent documenting and bug fixing). A couple of months after that I got an e-mail from the Swedish Pensions Agency development manager at the time. He wrote:

“I believe this project could prove to be the Pensions Agency’s – and perhaps Swedish authorities’ – most profitable and customer-appreciated IT-project ever! Much improvement for the money spent and in a short time. It usually never turns out as you would hope, but here it has done exactly that.”.

UX in the balanced team
Scroll to top