The Agile manifesto through other perspectives 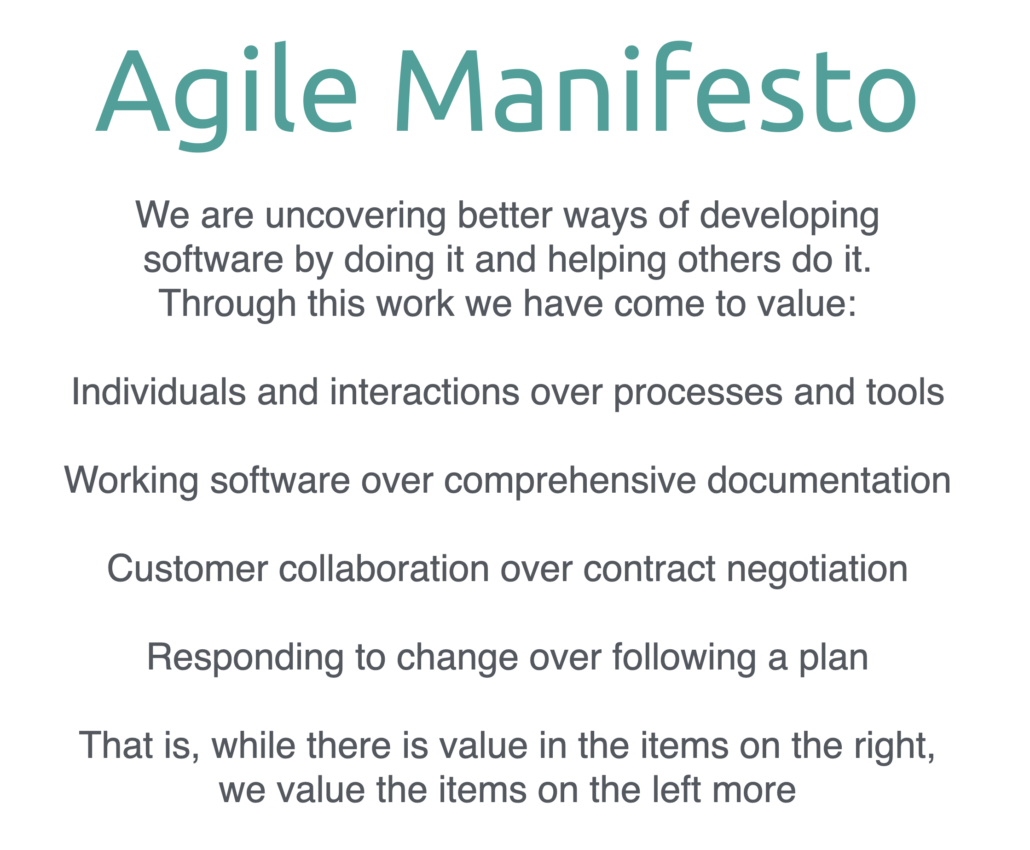 The Agile Manifesto is an interesting document to study. A lot of thought but also a lot of compromises created the statements. A few key take-aways for me, after I’ve been studying it almost since it came out in 2001.

With that said, I think there can be a lot of value in looking at the lines through a few different perspectives, to understand them better.

Let’s start with The Marshall Model. Moving from an analytical stage of maturity to a synergistic stage of maturity is, according to Bob Marshall, what we do when moving away from traditional values to more modern and Agile values. Let’s paint the Agile manifesto with appropriate colors. 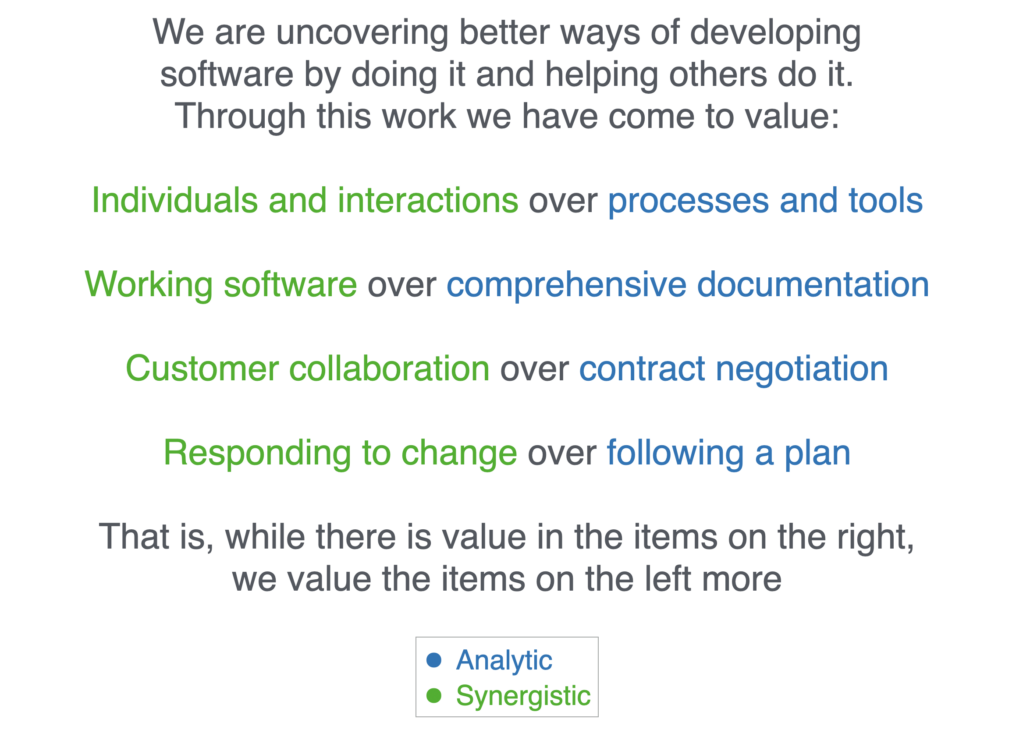 Processes and tools is analytic in the sense that it is enforcing discipline as a structure, by following rules set by these processes and tools. Individuals and interactions is synergistic in the sense that it focuses on the awareness of the system (the individual and the interactions between individuals in a team), which gives a more holistic perspective. I think the intention of this line is a belief in the individual and the team, that the best way to solve the problem is in the context that they are aware of, not a fictive context of the process or tool.

Comprehensive documentation is analytic in the way that it is meant to communicate only in a structured way. The key word is comprehensive. There’s nothing wrong with documentation, and it is often very needed, but relying on that as the main tool of communication will create a lot of misunderstandings. Working software is, as I said earlier, questionable. From a synergistic viewpoint, it is something that indeed can provide actual evidence. At the same time, only the actual software is not enough. We have to see this software in action, to see what value it can create.

Following a plan is analytic in the way that it is says a structured and pre-decided approach is the right way to go. Responding to change is synergistic in the sense that it promotes adaption based on evidence.

From this, we can draw the conclusion that the Agile manifesto was created to open up the next level of maturity, to be able to cope with complex environments, to use the power of synergistic thinking to reach a beneficial outcome for the whole system. For me, this is why I think UX, Service Design and other human-centered processes fit well with Agile. But, I wouldn’t think it if I read the manifesto superficially. So, let’s dig deeper.

The business coach Frédéric Laloux has been looking at maturity levels of a humans consciousness and translated those into cultural stages in organisations. They correspond fairly well to the Marshall Model, but can give both a broader and deeper perspective. Laloux’s stages are color-themed, going from Red to Amber to Orange and to Green. Laloux also suggested a new and quite unexplored stage after Green, that he calls Teal. He calls his model Reinventing Organisations. There’s a book from 2014, and a very comprehensive wiki. But here is a short version.

Let’s color the values of the Agile manifesto. 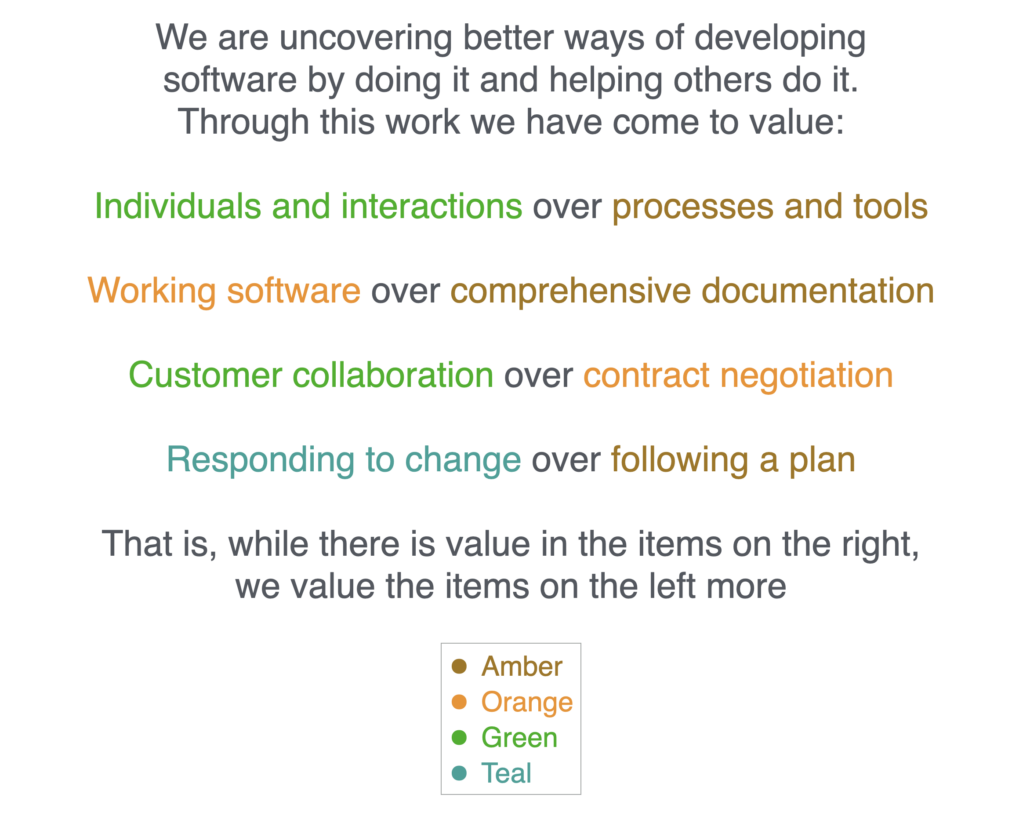 Processes and tools is a very clear Amber while Individuals and tools describe a Green stage of empowering people and trusting them to do good, as well as strength in diversity.

Comprehensive documentation is also a clear Amber while Working software is more about the scientific evidence, the achievement of the development effort, hence Orange.

Contract negotiation is following rules, but my assumption is that the creators of the manifesto meant to be able to reach a specific outcome, which would place it in Orange. Customer collaboration is a very clear Green, though, since it is all about collaborating and reaching an outcome iteratively.

Following a plan is almost the definition of Amber, while Responding to change could be seen as a more evolutionary approach, thus making it Teal.

What we also can interpret is that the purpose of the manifesto is evolutionary (uncovering better ways) and that the look on Amber and Orange values are inclusive (there is value in the items on the right). My take-away is that some of the creators of the Agile manifesto where heading in a more mature Teal direction, but had to write a few lines to appease others who were not yet there in their thinking.

The evolution of the Agile manifesto

Some of the creators wanted the manifesto to evolve and some wanted it to stay a historic document (which is what it has become). Around 8 years after the creation of the manifesto, Kent Beck, one of the creators, created an extended version. Below, I have colored it in the Reinventing Organisations stages. 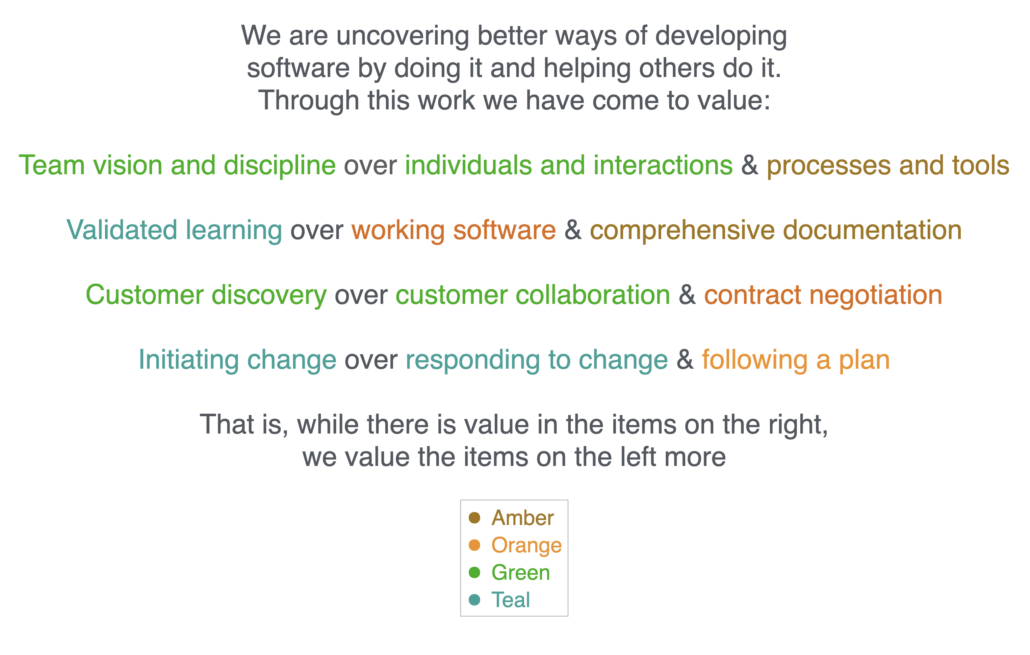 What Kent Beck is saying is that having a strong team vision and purpose as well as a team discipline following the vision and purpose will help the team more than focusing on individuals. To me, this more clearly articulates the power of diversity from the Green stage with the goal-centered-ness of Orange.

Validated learning is to me what Working software should have been all about. To be able to be truly evolutionary and take good decisions along the way, you have to focus on learning and attaining knowledge. Making sure that this learning is actually true, by experimenting and getting evidence, says to me that this is the best parts of Orange in a Teal package.

Customer discovery explains that whatever needs to be done is not only found through collaboration, but also through deep discovery of who the customer is. Learning about humans on a deep level is a very Green approach to me. This can possibly have some Teal aspects as well.

Being able not only to react on changes but actually initiate change, i.e. to be able to see into the future because you know so much about the context, the people in the context and their needs and behaviours, is truly an evolutionary approach, thus Teal.

Read more about a conclusion that Luca Minudel did around Kent Becks version combined with some others in “Freshened up Agile Manifesto“.

Maybe these two ways (or three, depending on how you see it), is not the way to make sense of the Agile manifesto, since the creators were probably not thinking in these terms. But, to me it checks out when talking about this and applying it in the real world. I imagine that my clients have gotten a better understanding of the values and principles through looking at them through these lenses, and that that has helped them understanding the why behind all the processes (such as XP, Scrum, Kanban, Lean Startup, etc) that exist in the realm of Agile. I hope it helps you too.